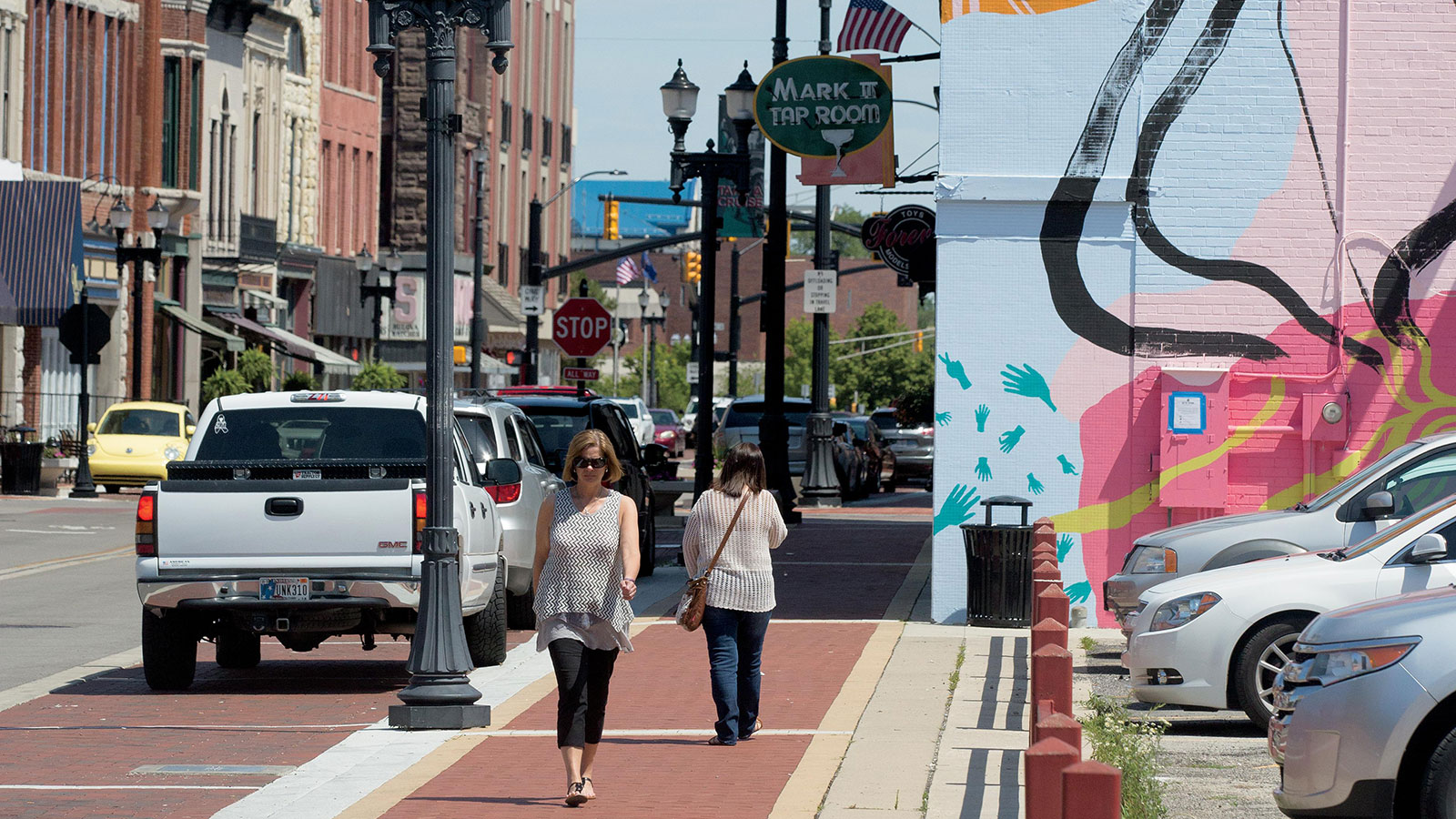 Residents of East Central Indiana enjoy the best of both worlds.

They benefit from a lower overall cost of living, compared to major metro areas such as Indianapolis, while also enjoying East Central Indiana’s good transportation network that makes it easy for them to drive to big cities when needed. Residents and businesses benefit from the excellent infrastructure that puts Indianapolis within an hour’s drive, Fort Wayne and Dayton within an hour and a half, and Cincinnati within two.

The cost of living savings in East Central Indiana are present all around, including housing costs in Muncie that are 10 percent lower than in Indianapolis, for example. In the smaller city of Richmond in Wayne County, housing costs are 24 percent less than Indianapolis.

One of the tens of thousands of residents happy to be in East Central Indiana is J.D. Collins, who lives with his wife, Jenny, in a rural setting in Hartford City in Blackford County. Collins is the national coordinator of men’s college basketball officials for the NCAA, which includes assigning all the officials for the March Madness NCAA tournament.

“I work from my home office but travel a lot, sometimes driving
a couple times a week to the Indianapolis airport that is 90 minutes away from my house out in the country,” Collins says. “People occasionally ask why I don’t move closer to Indy. My answer is always because I really like where I live in Blackford County.”

Collins moved to Hartford City in 1984 after graduating from college and has lived there ever since, enjoying life in a rural community.

“I’ve always been a farm boy at heart, so Blackford County is comfortable and has extremely nice people,” he says. “Housing costs are very reasonable compared to the major cities of Indianapolis and Fort Wayne, and the overall cost of living in Blackford County is excellent.”

Muncie and Nowhere Else

Also relishing life in East Central Indiana is Kelsey Timmerman, who grew up in Union City, Ohio, attended Miami University in Ohio, then wanted to leave the Midwest to travel and see how people lived around the world. He backpacked and ultimately traveled to more than 80 countries, documenting his travel adventure stories.

“Some people aren’t sure why I’m still living in Muncie, saying that I’ve gained success as a writer and can work from anywhere in the world,” he says. “But I’ve made many connections in Muncie and got involved with volunteering and other aspects of the community. I wouldn’t want to live anywhere else.”

“I started writing and got published in different magazines and newspapers, but my high school sweetheart, Annie, always wanted to return home to the Midwest,” Timmerman says. “The more I traveled, the more I was reminded of the beautiful images of flat fields of corn and soybeans in East Central Indiana.”

The couple returned to the region in 2007, got an apartment in Muncie and remained, yet today, in a rural setting on the outskirts of town. As a result of his previous journeys to foreign countries like Honduras, Bangladesh, Cambodia and China, Timmerman published a book in 2008, “Where Am I Wearing? A Global Tour to the Countries, Factories, and People That Make Our Clothes,” which made the New York Times’ best-seller list.

“Some people aren’t sure why I’m still living in Muncie, saying that I’ve gained success as a writer and can work from anywhere in the world,” he says. “But I’ve made many connections in Muncie and got involved with volunteering and other aspects of the community. I wouldn’t want to live anywhere else.”

Second Book and Soon a Third

Timmerman has since written a second book, “Where Am I Eating? An Adventure Through the Global Food Economy,” and is currently penning a third, “Where Am I Giving? A Global Adventure of How to Use Your Gifts and Talents to Make a Difference.”

“These days, I speak at colleges, universities, high schools and speaker series around the nation, but I always look forward to returning home to Muncie,” he says. “Muncie offers a good cost of living, affordable housing and I work at a co-working space in the city. I even do my morning workout every day at Muncie CrossFit at The Arsenal and then head to work by 10.”